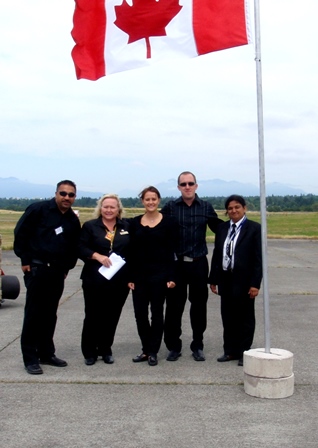 In the past, we’ve told you a lot about our Corporate Events.  Client Appreciations, Annual Staff Awards, Grand Openings, Fundraising Galas, and the like. But in addition to these customized events, we have also been entrusted with the official Welcoming Ceremony of some of the world’s most adored Imperial dignitaries, even royalty!

Organizing the arrival formalities for a visit from the Emperor of Japan is quite possibly one of the most colorful feathers in the Bright Ideas cap! Likely you’ve seen the Imperial couple, the Japanese Emperor and his wife.  They’re diminutive in size; cute, even.  But their stature is everything but miniature.  Polite.  Dignified.  Patient. Attentive.  Friendly.  Regal.  And their welcome ceremony was to match.

Visits from foreign dignitaries are coordinated to the very last detail and are ripe with tradition and protocol.  The Emperor arrived to a delegation from the Royal Canadian Mounted Police in full dress uniform, representing a welcome from the Canadian Administration and Public, who saluted the Monarch as he disembarked his jet.

The couple was then received by the British Monarch, represented by the Canadian Governor General, a sign of respect to acknowledge and match their royal ranking.  And his protection while on Canadian soil was taken up by the Vancouver Police Department, who whisked away the royal couple in gleaming black town cars surrounded by motorcycles flashing their red and blue lights and squawking their sirens.  It all looked so special, a few moments filled with Imperial importance.

It’s All About the Flags

But the Emperor couldn’t arrive without the proper pomp and circumstance.  Bright Ideas was handed an instruction book, a 100 page document regarding the protocol of how and which flags needed to be flown.  We sourced the flags, steamed them flat, and then raised them on their poles which had to be so many feet apart. 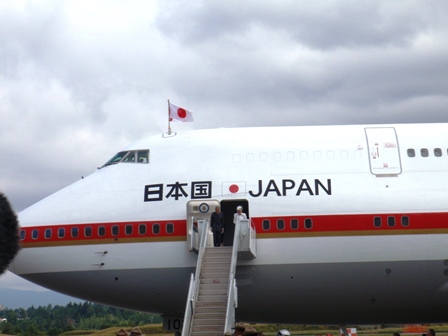 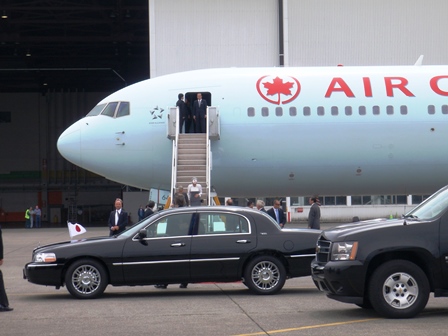 And now let’s talk about the Red Carpet.  You’ve seen these, mostly when Hollywood movie stars strut their stuff for the cameras to show off the designer fashions they’ve chosen to represent at whatever the occasion is.  But for the Emperor of Japan, a Red Carpet has nothing to do with clothes.  It’s about tradition and protocol.  The Emperor absolutely mustn’t step on the ground.  And because we could never know where his jet would come to an ultimate rest, we had to place the Red Carpet upon the full stop of the craft, and unroll it as quickly and as straight as possible, leading to his awaiting town car which also made a final adjustment so the rear passenger door would be perfectly in line with the long, red line.

Now, all of this comes only after months of background checks on all of the event staff who must be pre-scheduled to work this occasion.  These kinds of shifts become like airline tickets: non-refundable, non-transferrable!  We certainly do have to make sure we’re part of the security protocols.  We have to engage in risk assessments which involve declaring our vehicles so onsite security can expect it, knowing the floorplan of the building in the case a sudden action evacuation is required, providing a list of all equipment and décor items we’ll be bringing so they can be pre-approved, and obtaining temporary security badges, so everyone onsite can know we’ve been through all of this pre-screening.  Clearly, it’s no joke when the leader of a foreign country steps on your nation’s soil, and a Monarch, no less! 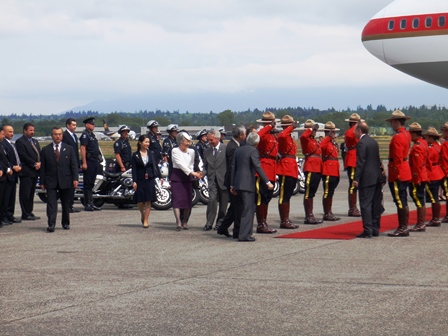 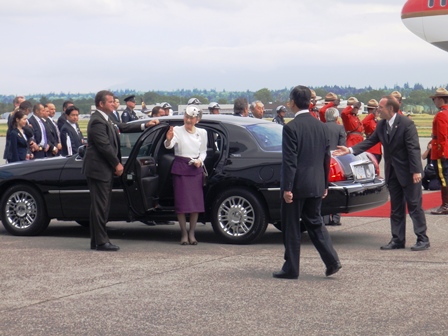 And Bright Ideas has been doing such visits for years: to name a few, the Australian Governor General, the Indian Prime Minister, and the (yes, THE) Royal Couple, Will and Kate…huh-hmmm…Their Royal Majesties the Duke and Duchess of Cambridge, sorry!

Visits by foreign dignitaries pass by in the blink of an eye, as they arrive, descend the airplane steps, shake a few hands, walk the Red Carpet, and are carried away in luxurious vehicles.  But they are steeped in traditions and protocols that are as old as the ages.  It truly is a privilege to be and to continue to be a part of something so special, so momentous, so historic as a Imperial visit from the Emperor of Japan.