Culinary game show style corporate events are hot right now.  Really hot!  Not a sleezy, 70s knockoff gig, but a well-planned, all-hands-on-deck style competition that leaves guests breathless at your dedication to their fun.  This week, Bright Ideas is going to explain what is a Culinary Chaos game show event.  Let’s see what’s behind Door Number 1! 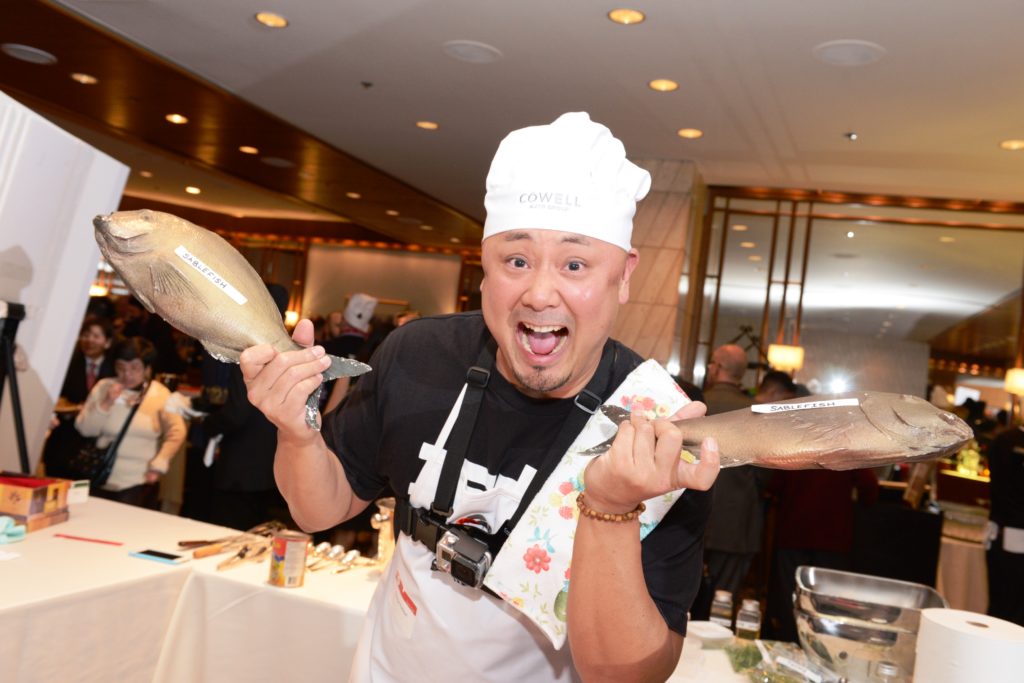 A Culinary Chaos event is for a group of people who love food!  Not food critiques and professional tasters.  But people who just love to eat!  This event was designed for just such a crowd, specifically because they had encountered a multi-year streak of bad luck with catered food.  One year, they ran out.  Another year, it got cold before the last tables were called.  And another year it was just not exciting.  So, Bright Ideas customized Culinary Chaos from scratch to renew this crowd’s faith in good food.

Not only did we ensure there were endless canapes and entrees for days.  But we incorporated food into the raison d’etre for the evening.  A game show event that was a cook-off in which absolutely everyone had to participate in some capacity.  As we said, Culinary Chaos was all about good food!

As not everyone could be involved in the food prep for various health and logistical reasons, we divided the guests into three teams along natural divisions between departments.  We knew there was a history of friendly competition between departments, so this idea would work beautifully to get everyone invested, if only to beat the other guys!  Their VPs did the actual cooking, but each guest had to help solve the team’s recipe riddle.  The recipe had been deconstructed much like a Mad Lib word game.  Guests had to fill in the blanks using the key words they received at Registration.  Some words were decoys, some were real.  Everyone had to work together to sort out the recipe, and then go shopping in the pantries to bring all of the ingredients and equipment to their VP chefs.  But it wasn’t as easy as all that; there were decoy pantry items to go along with the decoy words!  So you can see how the recipes could go terribly wrong, or Chaotic!  Insert evil laugh here! 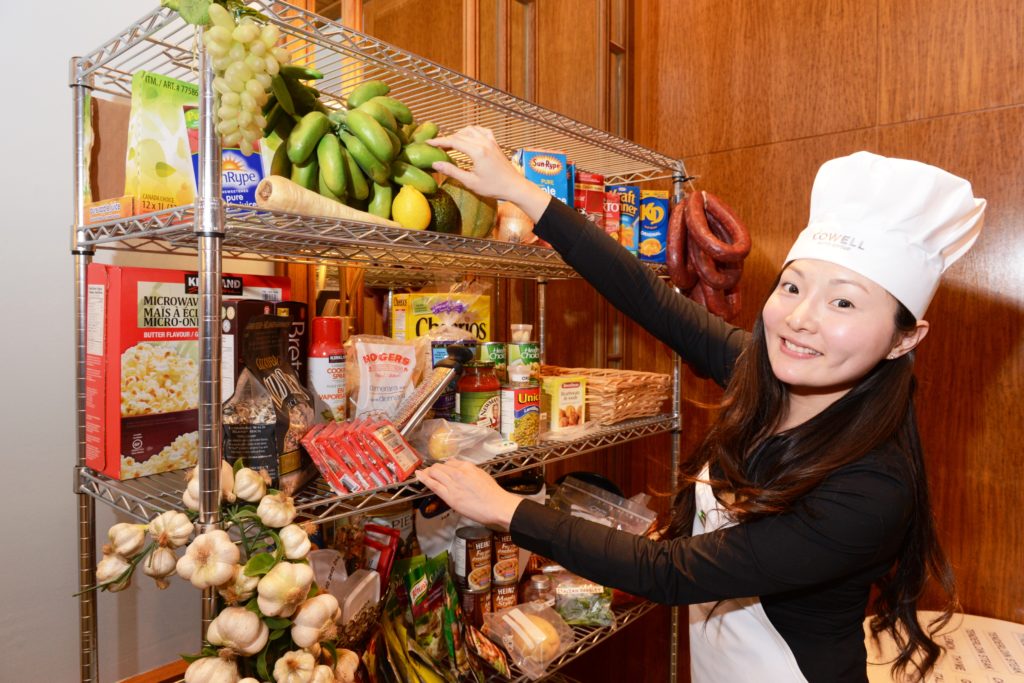 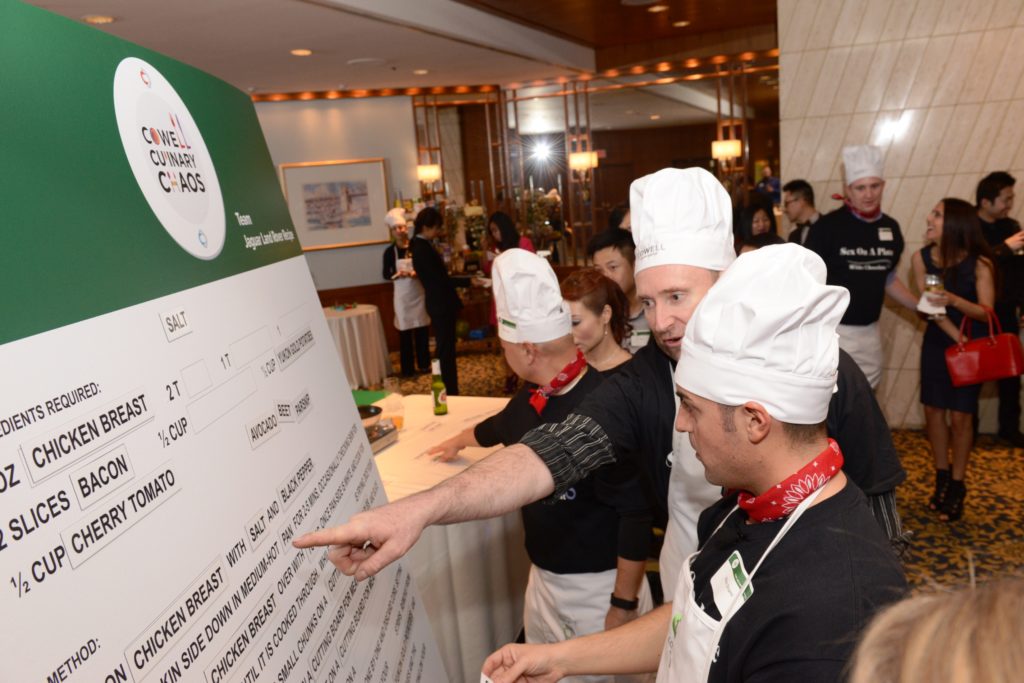 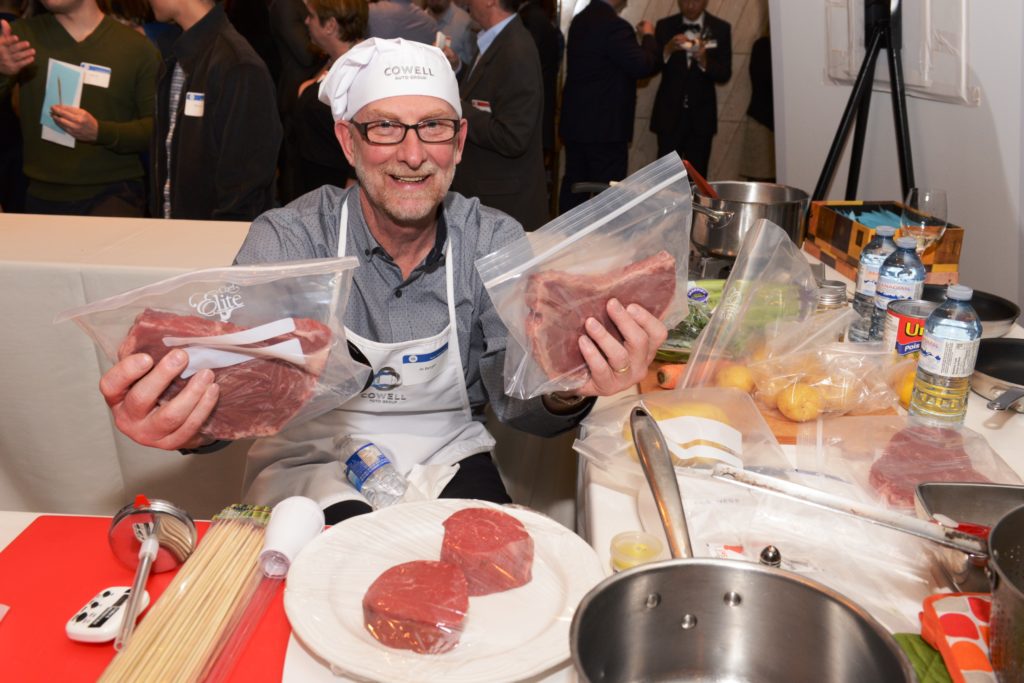 Throw in that competitive factor we mentioned, and you had sabotage and subterfuge and treason on all fronts!  It was great!  Guests did whatever they could to stymie the other teams, even to the point of hiding cooking equipment and scrambling the other teams’ recipe boards!  The whole thing was MCed by a local food celebrity, so he was giving everyone a micced play-by-play of all the successes and misdeeds, and cracking jokes in his commentary.  There wasn’t a straight face in the house!  But, once the Cocktail Reception was over, approximately 90 minutes, however the recipes stood was how the VPs had to cook.  So there was a real time crunch, a sense of urgency.  Culinary Chaos was certainly abound!

After the buffet dinner (not concocted by our VP chefs!), the chaos continued as the VPs now finished their meals based on the patchwork set of ingredients and equipment each team was finally left with.  All eyes were front as each VP chef in turn presented his ‘masterpiece’ to a panel of three judges, including the co-owners of the company as well as the Executive Chef of the hotel venue, a token of professionalism in this evening of duplicity and chaos!  Tears were shed in laughter when one VP chef…urgh… ‘accidentally’ spilled his presentation all over one of the owner’s laps!  I mean, who could pass up the chance to ‘stick it to the man!’

You might be thinking, “how on earth could such competition and chaos be fun?”  Well, it was the epitome of fun!  By addressing our client’s basic requirement that the evening be all about food, by tapping into the friendly, competitive nature already present in abundance between departments, and by designing an event in which absolutely everyone could participate as much or as little as they wanted, Bright Ideas customized an evening that was in every way suited to this client and her guests. 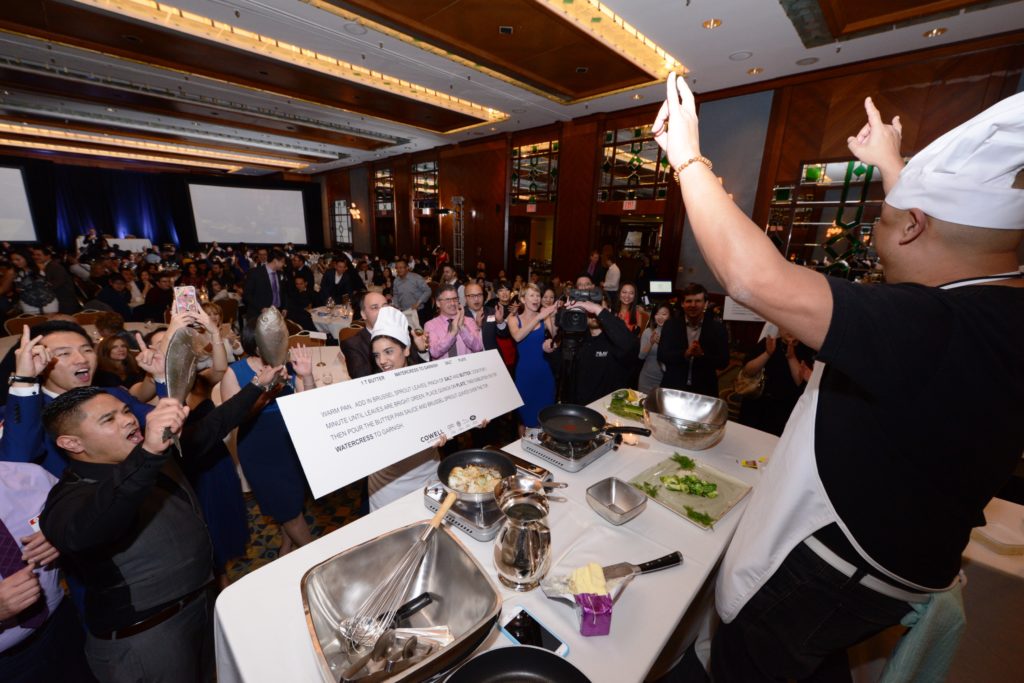 Culinary Chaos was not only fun to produce and a feather in the cap of our client, but many guests could be heard upon exiting, “best event yet!”

So if you’re reading this thinking, “my colleagues love food, are competitive, and love getting involved,” then you need to call Bright Ideas and we’ll get started planning your next corporate event.  Imagine it now: Culinary Chaos, a well-planned, all-hands-on-deck style game show event designed just for your colleagues!  They will certainly be breathless at your dedication to their fun! Call us today for your FREE consultation on how to make your next corporate event AMAZING!!! 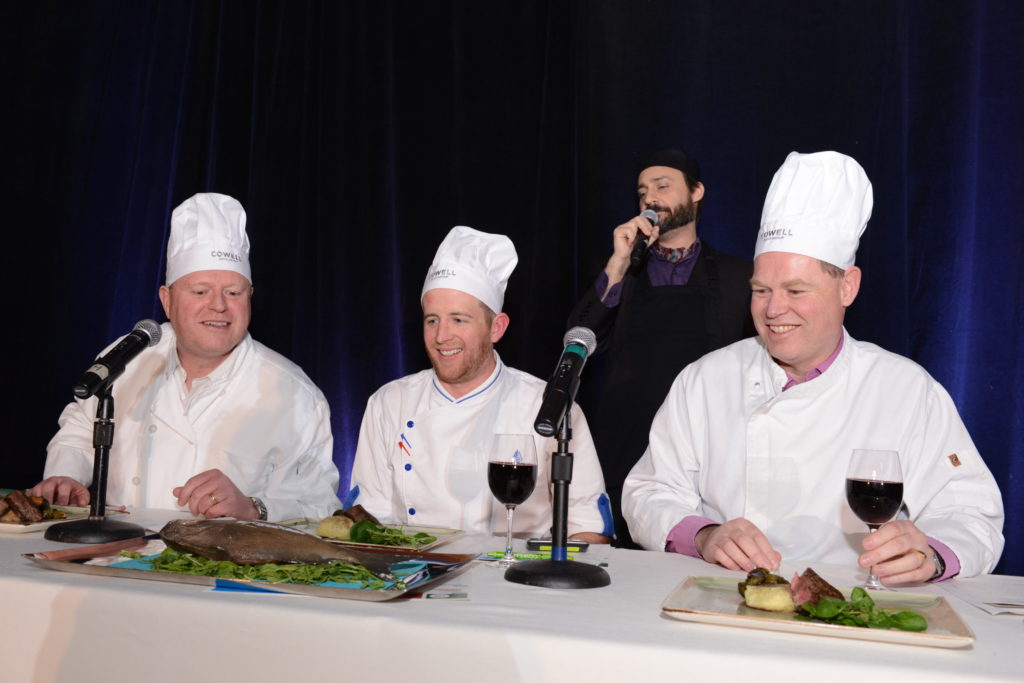