Plan The Best Event Ever!

A unique western town was constructed where guests could roam throughout the town and socialize. The event space was divided into 3 décor and activity zones, so that it was like having three events in one!  Zone 1 offered Food & Beverages, Zone 2 hosted the Saloon (bar & gambling) & Zone 3 showcased the Awards Theatre. The event was so successful because we were able to merge the feel of the Wild West with a modern style, western setting without losing the authenticity. It was so cool! 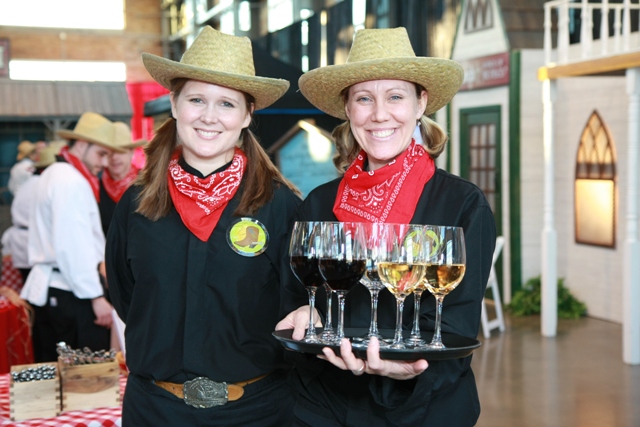 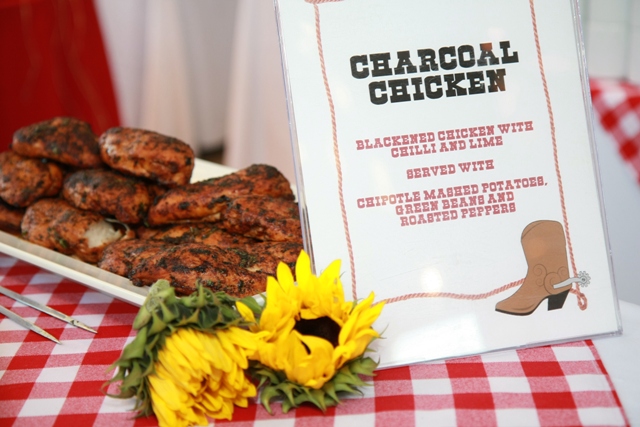 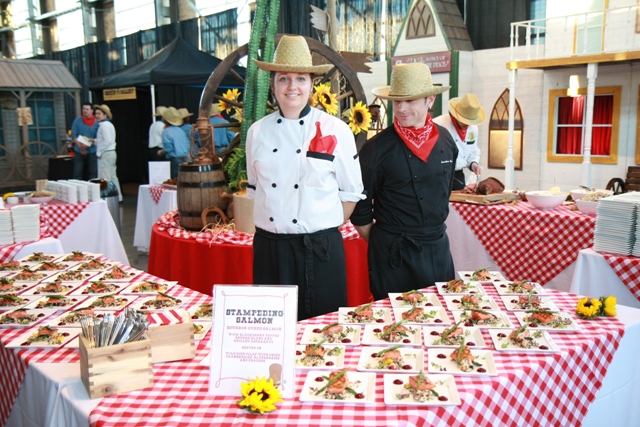 In Zone 1, an authentic western setting was achieved through the use of western backdrops & storefronts, wagon wheels, hay bales, fencing, western games, entertainment and activities. When guests checked in at Sheriff’s Office (registration), they were told to leave their guns here and were presented with a Cowboy Hat and Bandana to get them into the western spirit.  Event and catering staff dressed in theme costumes of denim cowboy shirts, blue jeans, cowboy hats & bandanas greeted the guests. All event staff were wearing round name badges with the brown cowboy boot, which was the event image/brand (see included with submission).

A hearty western menu was offered for the cowboys at heart, where they could dine with friends on red and white checkered linen seating vignettes scattered amongst the storefronts or relax on the porch of the various storefronts such as the Bank, Hotel or Blacksmith Shop. As the evening progressed, we turned the lights on behind the façades, so that it appeared that there was some sort of activity going on inside the various shops at night. 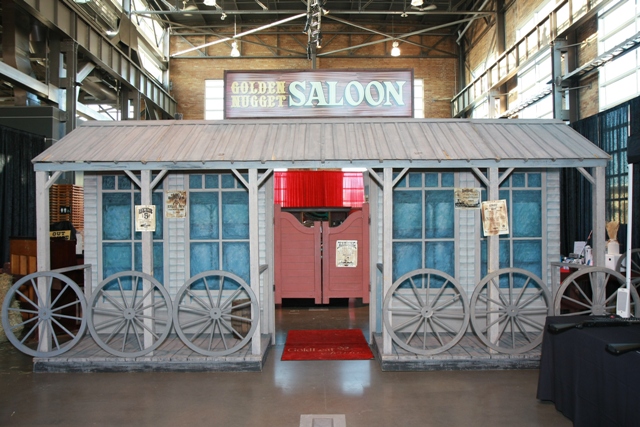 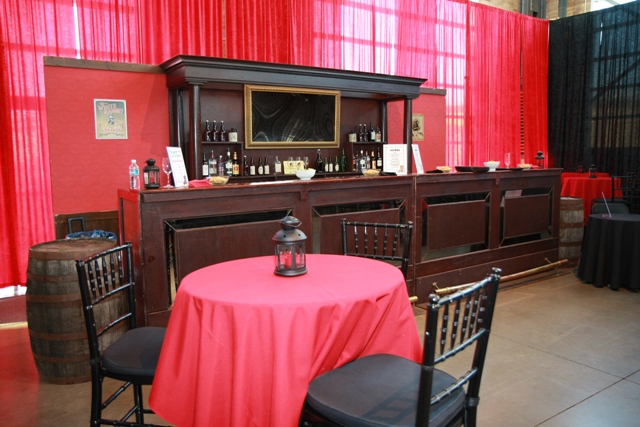 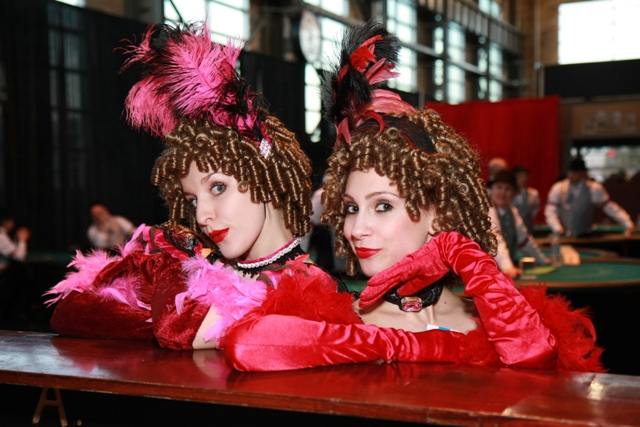 The Saloon façade was extremely large and acted as an anchor to the western town street.  The façade had operational swinging doors and inside the Saloon we erected a 30’ long actual saloon bar complete with a mirrored backing to hold alcohol bottles. The Saloon was enclosed with wooden fencing, giving it that authentic western feel. Saloon Girls invited guests to enter through swinging doors to discover a casino hosted by Wild West dealers in armbands, bolo ties and derby hats – just like the Wild West days! This area encouraged networking and mingling, as guests played the casino in a fun, competitive environment.

A “western styled bank” was available to all guests giving them the opportunity to donate money to a charity of your choice in exchange for additional play money. The casino was complete with everything from play money, playing cards and poker chips right down to casino themed table décor, prize draw boxes, ballots and counting machines.  Our staff facilitated several prize draws throughout the evening, allowing guests numerous chances to win prizes.

In the Saloon, a Honky Tonk Piano Player alternated sets with a Disc Jockey who played country and western tunes.  Also present in this area, nestled in a vignette of hay bales & wagon wheels, was a Caricaturist Artist offering customized coloured western posters on the spot.  We also wanted to bring in some modern western flavour, and did so with the inclusion of virtual Western games such as Western Wii and The Shootin’ Gallery. 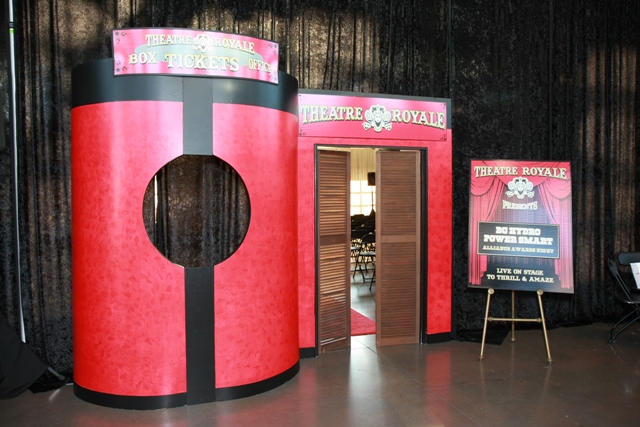 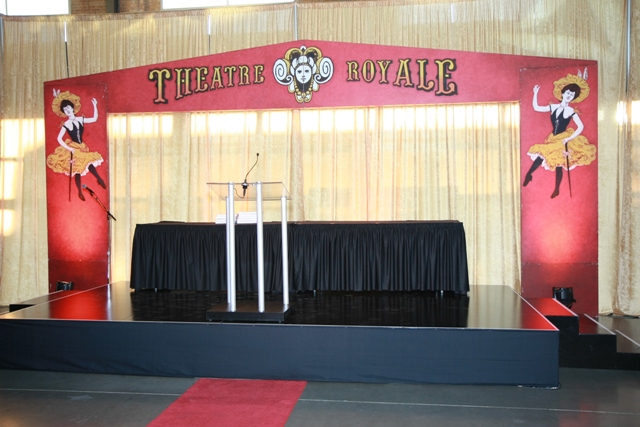 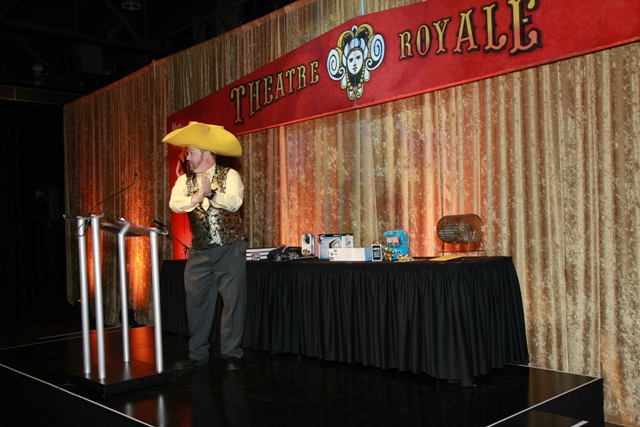 One of the main event objectives is that the awards portion of the event be kept a surprise until just before the awards ceremony.  This year was no exception. The Theatre Box Office entrance, one of the town facades flanked by 16’ tall black velour drapes, was kept closed until 15 minutes before the awards show.  When the box office opened, we started to pop popcorn and the aroma enticed the guests to see what was playing inside the theatre.  We had designed the awards stage to resemble an old fashioned Theatre Royale stage setting complete with gold velvet curtains and old west imagery on the wooden backdrop.  Winning recipients were called up on stage by a Spoof Cowboy MC and were awarded their recognition plaques.

Many guests commented that the fantastic western town décor setting was so amazing, that it encouraged conversation. The Saloon with swinging doors and Saloon girls offered a playful environment as guests approached the gambling area. And finally the concealment of the Theatre Royale behind the functional Box Office which was located in the town street, ensured that the guests were continually amazed and engaged, wondering what was going to happen next. It was as if the event décor was part of the event entertainment, as it came alive and encouraged guests to interact. 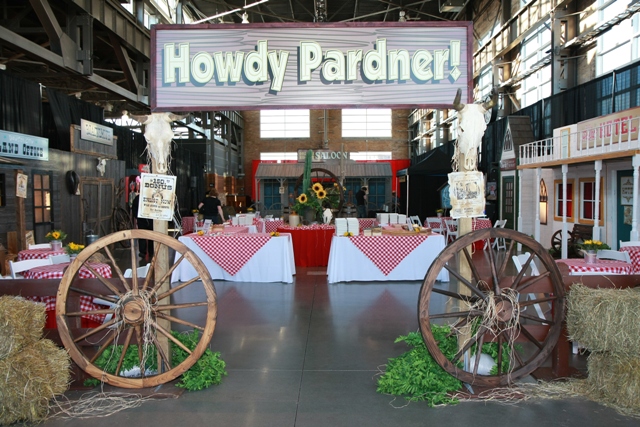 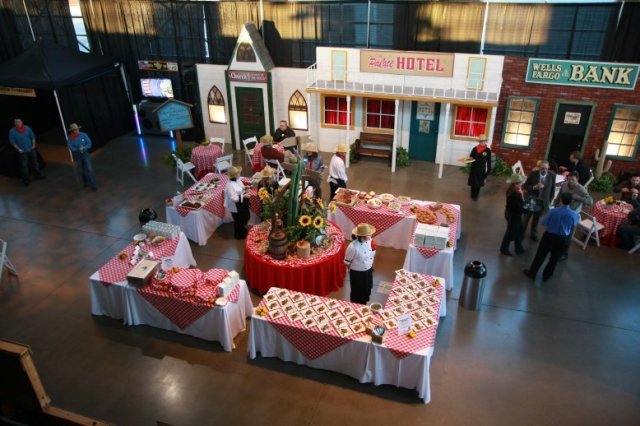 The event achieved all of the set objectives, as it transported guests into another time frame and allowed them to imagine life in the Wild Wild West. If you want your next event to be the talk of the town, call us today at Bright Ideas Events. To see amazing photos of this event, click here.

Dance and Cry – It’s good for you!